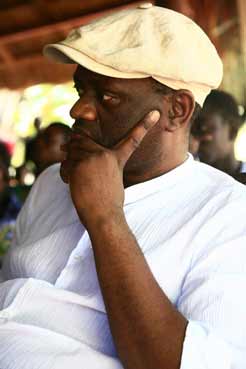 Africa is at the heart of many events that are unfortunately all too often held outside of that continent. Thus, its thriving youth is deprived of exchanges, and left unable to voice its views of the world in front of the world and with the rest of the world. A new generation of artists is asserting itself through literature, music and cinema, with the dream that Africa will affect our humanism through imagination. In English-speaking Africa, several writers have received the literature Nobel Prize : Wole Soyinka (Nigeria 1986), Naguib Mahfouz (Egypt 1988), Nadine Gordimer (South Africa 1991) and JM Coetzee (South Africa 2003). The year 2006 marked the emergence of new voices in French-speaking Africa : Léonora Miano (the High School Students Goncourt Award, 2006), Alain Mabanckou (Ouest-France/Etonnants Voyageurs Prize, 2005 ; Renaudot Prize, 2006), Kossi Efoui (Francophonie Five Continents Prize, 2007), Wilfried N’Sondé (Francophonie Five Continents Prize, 2011), Gilbert Gatore (Ouest-France/Etonnants Voyageurs Prize 2008). Though little known in France, the literature of Portuguese-speaking Africa has its own prestigious writers (Mia Couto, Jose Agualusa). Spanish-speaking Africa is yet to be discovered.The 2002 Etonnant Voyageurs Festival in St-Malo and several others in Bamako discovered the New Voices of Africa. At the time, most guests were barely known to the public if at all. Yet they left an imprint on the French literary world, driven by the same desire to take stock of the situation in contemporary Africa, and to draw a sketch map of an Africa on the move.The 2013 Brazzaville Etonnants Voyageurs Festival (14- 18 February) will confirm this momentum and show the impetus of imagination throu- ghout the world. About a hundred writers, film directors and musicians from Africa and the rest of the world will tell us of a continent on the move, a new and fledgling continent. Just as it used to be, with the Liaison magazine or when it discovered the incredible voices of Tchicaya U Tam’si, Sony Labou Tansi, Henri Lopes or Emmanuel Dongala, Brazzaville will once more be the junction of African art.