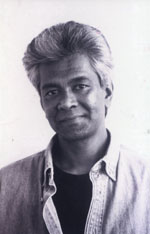 Neil Bissoondath was born in Trinidad in 1955, into a family of third generation Indian immigrants. A novelist and short story writer, he emigrated to Canada in 1973 and has been living in Quebec for several years. He has published an important essay on Canadian multiculturalism.

A summary of The Unyielding Clamour of the Night :

There is certainly much darkness in The Unyielding Clamour of the Night. Set in a fictional South Asian nation that’s clearly modelled on Sri Lanka, the book tells the story of Arun, an idealistic young schoolteacher who moves to a village in a southern region beset by a violent insurgency, and who soon finds his hopeful view of human nature tested to its core. Refusing tidy moral distinctions, the novel asks a host of uncomfortable (and timely) questions about the motivations of suicide bombers, about occupying armies and their inevitable atrocities, about the way in which war can become, for the unscrupulous and opportunistic, a welcome source of business.