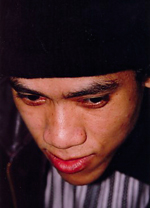 Jean-Luc Raharimanana was born in 1967, in Antananarivo, Madagascar. He is a Malagasy writer in French.
He obtained a first university diploma in literature in 1989 and started working in the theatre with Christiane Ramanantsoa to help direct Le Prophète et le Président. However, the Alliance française decided to cancel the play in the end because of political pressure by the minister of culture and the Malagasy government. The official reason was that they wanted to avoid a diplomatic incident.
Two months later, Raharimanana obtained the award for best short story from Radio France Internationale (RFI) and accepted the scholarship which allowed him to come to France.
The play Le Prophète et le Président was eventually put on in Limoges and Avignon. It was directed by Vincent Mambatchaka. It went on a tour of Africa, France, Canada and Belgium.
In Paris, the writer started studying first at the Sorbonne then at INALCO (Institut national des langues et civilisations orientales) where he obtained an advanced degree in literature and civilisation with Malagasy tales as his subject of research.
He was a freelance journalist at RFI and worked on a project for the theatre. He contributed to the development of a school of the theatre arts in Madagascar. He also had a project that took him on a three-year world tour. He then started teaching French and cooperated in many literary, pedagogic and journalistic events in the USA, France, Italy, Rwanda and Madagascar. All of these activities testify to the writer’s commitment.
In 2002, Jean-Luc Raharimanana stopped teaching in order to defend his father, a history professor at the university of Antananarivo who had been arrested and tortured by the Malagasy authorities following a radio show on the history of Madagascar. Afterwards, Raharimanana felt all the more the necessity of focusing all his attention on his writing, on research and the restoration of the memories of his people that had been corrupted by tales where myth and fiction intermingle. So far, he has published some short stories, Lucarne, Rêves sous le linceul, a play,Le Puits, and a novel, Nour. Madagascar 1947 is being published the year that marks the sixtieth anniversary of the Malagasy insurrection.

“It is an island, it is too far. And 1947 was a long time ago. The soil of the island is red. Let us begin by saying that these are true facts, that assegais flew, bullets whizzed, and bodies lay strewn about. You hear laughter, but laughter hides the pain. You may laugh at these lines that only seek understand why I should try to justify my claim to my memories. My island is too far. The year 1947 happened too long ago. […] My memory is asking for justification from the mother country …
What are we actually talking about ? About 1947, March 1947 and everything that happened then. The insurrection against the French colonisation. The oppression that lasted two years. I was speaking about something that should be obvious. Indeed, 47 is a painful number on the Main Island ; it spells the end of a world, loss and defeat, the deep silence of a period that is endlessly gnawing at us, haunting us …”
It is a remarkable document, the testimony of a committed along with pictures from the Charles Ravoajanahary Fund that depict Madagascar at the end of the 19th century until 1947. The book deals with the relationship between the colonized and the colonizers, between past and current power, the silence from both sides, the writing of history by the North and the necessity for the South to question the North’s perspective on things.