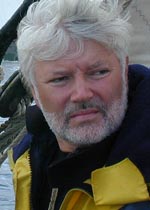 Hervé Hamon, born in 1946, is a writer and publisher. He taught philosophy for five years and obtained a doctorate in social history before moving on to become a full time writer and publisher. His first writings were serious sociological or historical studies (Les porteurs de valises, Les Intellocrates, Tant qu’il y aura des profs, Génération, Tu vois je n’ai pas oublié with Patrick Rotman, and Nos Médecins and Tant qu’il y aura des élèves by himself). He then started writing essays and more personal and literary works where the sea occupies an important place (Besoin de mer, L’Abeille d’Ouessant, Le Livre des tempêtes, Au bout de la remorque, Le Vent du plaisir). He also writes for Géo and Cols Bleus. For twelve years, he wrote a column for the Monde de l’Education and was appointed to the Haut Conseil de l’évaluation de l’école. His latest book on the subject of education is Tant qu’il y aura des élèves published in September 2004. In April 2005, he cowrote with Anne Smith an art book, Cargo, which gives a description of harbour work and dreams and in March 2006, he published De l’Abeille à l’Abeille, la relève de l’Abeille Flandre, a description of the construction of the large rescue boat, first in Poland then in Norway. Paquebot is his twenty-sixth book, but his first novel.

A brief summary of Paquebot :

“BIENVENUE ! WELCOME ! WILKOMMEN ! The crew of the Imperial Tsarina ‚ex-Loukoum II) is at your service to make your cruise in the azure waters of the Indian ocean unforgettable.”

This how Massimo Pajetta, the great organiser of small pleasures welcomes his passengers (against a background of re-mixed Adagio/Bambino). We will closely follow these characters : Santucho, nicknamed Shrimp, the chief and commander ; the guest speakers, Martin Korb, the brilliant but uptight scientist who falls head over heels for Svetlana, the beautiful principal chorus girl ; Angelo Romano, ex-Vatican advisor, on bad terms with his administration ever since he published an Apologia on licentiousness, who is not blind to the charms of Ines Magri, a funeral make-up artist ; and last but not least, Marios Soteriades, a ship owner (Greek, of course) and his formidable mafia associate (Russian, of course) both of whom fish in troubled waters…

You will have guessed that this is not a novel of ideas nor an autofiction, but rather a fifties musical and the plot and the developments like a dance by Gene Kelly and Syd Charisse. But it is also a major maritime adventure with great suspense. Indeed, at page 47.5 Marios Soteriades files a petition in bankruptcy and orders Shrimp to turn around and head for port. After 22 seconds of due thought, the commander sends him packing (off to Greece) fearing the anger of the 780 passengers who have paid for their tickets in full. The cruise becomes a phantom one but everyone continues to have fun. This is perfect novel for the summer holidays. It contains everything, adventure, exotic landscapes, feelings, love and erotic moments, humour and frozen foods, and even a murder.