Jean d’Ormesson was born in Paris, the son of a Front populaire ambassador and friend of Léon Blum. He was brought up to respect traditional values. He studied at the Ecole normale supérieure and passed the philosophy aggregation. He was Secretary-General of the International Council for 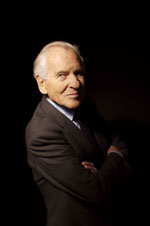 Philosophy and Humanistic Studies at UNESCO and the director of the French newspaper Le Figaro. He was awarded the Grand prix du roman de l’Académie française for "La Gloire de l’Empire" in 1971. On October 18, 1973, he was elected a member of the Académie française following the death of Jules Romains.
Jean d’Ormesson’s novels distinguish themselves by their singular genre. He has written, both traditional and somewhat autobiographical works like Au revoir et merci,and Du côté de chez Jean where he discusses his life, the life of a man confronted with various responsibilities and obstacles to simple experiences of happiness. And in other books, the writer explains his philosophical approach to life. Le Rapport Gabriel, La Douane de mer, Presque rien sur presque tout are life treatises. In his most recent books, he explores other aspects of life (Casimir mène la Grande Vie), introducing new and different characters (Voyez comme on danse).

This book is a collection of some of the thousands of articles written by Jean d’Ormesson for the Figaro from 1969 until recently. There are chronicles of his moody reactions to events, thoughts on a changing world, and enlightened interpretations. These witty writings were always an opportunity to pay homage to the great intellectuals of the end of the 20th century and the beginning of the 21st. Jean d’Ormesson talks in this book about his love of literature, art and life with a very contagious jubilation. He also gives an account of his many trips, both real and imaginary, with major figures such as the painter Raphaël, emperor Frederick 2nd , the poet Charles Péguy or tennisman John McEnroe.
His chronicles are at times erudite, enthusiastic or polemical, and are surprising in their freshness and candour. Even twenty or thirty years later, they still transport the reader to another dimension, while remaining truly entrenched in our century. They give us as much insight into the mind of the writer as would an autobiography.