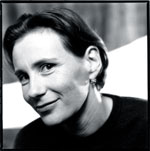 Marie Desplechin was born in Roubaix in 1959 and lives in Paris. She studied literature and journalism before dedicating her life to writing. She has sold 150,000 copies of her books, some of which have been translated into about fifteen languages. Her fist novel, Sans moi in 1998 met with exceptional success. She also and mostly writes for young readers. In her works, she uses a step-by-step approach in the belief that it is possible to interest children in just about any subject. She is said to prefer writing for children as there is simply too much at stake in writing for adults as critics are always waiting to pounce on writers. Yet, she never hesitates to deal with serious subjects such as the existence of God, family crises and relations between adults and children.

Marie Desplechin and Denis Darzacq bump into one another in Bobigny in 2004. They have been friends for a great many years and share a form of sensitivity which is probably at the root of their presence in that suburb that is both close to and distant from their own lives. This book is the result of that fortuitous meeting. Combining text and pictures, Bobigny, centre ville is a story of destinies, friendships, cultures, city planning, architecture, history, memories and Utopia. The writer and the photographer give the readers an account of their perambulations that goes straight to the heart of the matter.