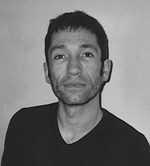 Franck Krebs was born in Bordeaux in 1963. He studied literature and went on to teach French in 1989. He teaches in a secondary school in Rouen. One night, as he was thinking back on his own childhood, Tom Cox’s character just came to him, alive and independent.
(Loose translation)“I have often been struck as a teacher of French by children’s reticence with regard to reading. I’m always surprised as well by their enthusiasm for this or that book. So I eventually wondered about what I would want them to read and whether I could write it myself.”

How can a twelve-year-old boy stop Mordom Horpilleur’s fiendish deeds ? The oracle was categorical, salvation, if and when it comes, can only come from Tom Cox, the descendent of a famous line of wizards. Tom has indeed inherited the gift against all odds. That is what he finds out from his great-aunt just before she sends him off to ancient China…
Thus start the adventures of this novice hero who, in each book, goes through a door and finds himself in a different period, in a different place to foil the fiendish plans of the master of Black magic. But from one adventure to the next, Mordom’s powers increase and his plans of conquest involve Tom in ever more dangerous situations, until the final confrontation …