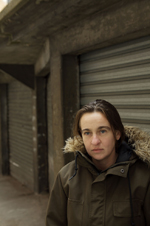 Céline Minard was born in France in 1969 and studied philosophy.

Jaume Roiq Stevens is an astronaut working on several missions in a space station in orbit around the world. Suddenly, he receives the order from ground control to evacuate the station because of a fire. He refuses to obey the order and remains alone on the station for several months when he has ample time to study strange earth phenomena, but the lack of communications with earth will force him to return. Several surprises greet him back at the base. Florida seems to have been completely abandoned by its inhabitants whose clothes lie around as though they had been hit by a major catastrophe. The animals seem to have got their freedom back. Stevens has to face the fact that the human species has disappeared. He feels he has gone mad with the hopelessness of it all and, in schizophrenic trance, goes on a trip from the plains of Central Asia to India, to the Alto Parana and Africa. It is a mind-boggling trip in time, space and culture through all these lost worlds. Combining suspense and poetry, this powerful odyssey of the last man on earth borrows heavily from contemporary technology and ancient sagas.